Like many other young couples, Gail Heyman and her husband, Lyons met in college, got married after they graduated, and waited a few years before starting their family. Although having children is always a big step that will forever change a couple’s life, their experience was even more life changing. They gave birth to their first son, Jared, and then to another son, Scott, a few years later. They noticed some differences between the siblings and worried that Scott wasn’t meeting developmental milestones, but didn’t overthink it because no two children are ever alike. For reassurance, they visited a pediatrician who said that Scott would outgrow the problem; however, as they later discovered, Scott has Fragile X syndrome, which caused the delays in development that his parents had noticed.

Fragile X syndrome (FXS) is a genetic condition that causes intellectual disability, behavioral and learning challenges and certain physical characteristics. FXS in inherited in what is called an X-linked dominant pattern and occurs in males and females, although males are more frequently affected and generally with greater severity. As many as 1 in 4000 males and 1 in 8000 females have this syndrome, and approximately 1 in 300 women are carriers of the Fragile X pre-mutation.

Like many children with FXS, Scott didn’t talk until he was much older and, according to Gail, his motor skills were “on the light side of normal” and he didn’t seem to respond to cues. At around the same time, Gail’s sister had two children who were both developmentally delayed, so eventually they decided to get genetic testing and discovered that both sisters were pre-mutation carriers for FXS. Gail also had a daughter, Carly, after Scott and given FXS’s inheritance pattern, everyone in the family got tested to learn whether they too carried FXS. 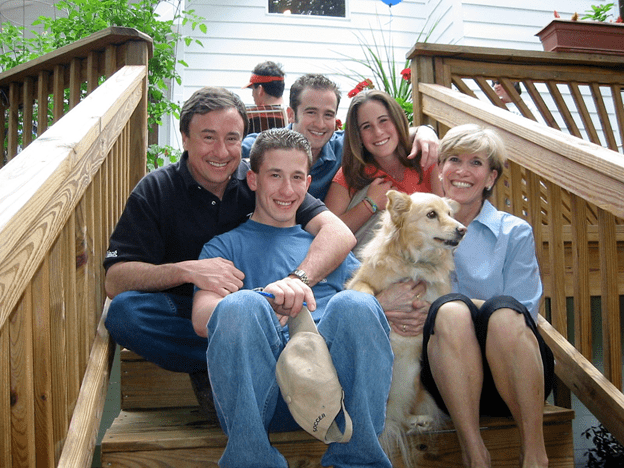 Their discovery about FXS being carried throughout the family didn’t get them down, instead it actually gave immense meaning to everyone the syndrome touched and inspired some very powerful work in the family. Carly was inspired by FXS after having to write a high school English report on something genetic, so of course she decided to write about FXS! At 16 she published a book called ‘My eXtra Special Brother‘ and continued to have a passion about the syndrome as she worked towards her career as a pediatric occupational therapist. Jared also found inspiration in his brother and has created a start-up called CrowdMed, inspired by Carly’s FXPOI (fragile X primary ovarian insufficiency), yet another fragile X related disorder.

Through it all, Gail and her family have been a beacon of light to people affected by FXS and couples making decisions about genetic screening. The Heymans were fortunate to get the attention of many news channels interested in telling their story, so they took the opportunities that came their way to teach others. Gail said in regards to the way FXS affected her family’s life: “It’s been a big family endeavor that has affected everyone’s life in both positive and negative ways. It’s not a bad thing, just our thing.” For Gail and her family this was a learning experience that brought good into their lives.

Using her experiences, Gail and her family have done incredible work raising awareness and funding for FXS intervention and research, and have helped create a community of families sharing their experiences. The Heymans understand, though, that for some avoiding such genetic diseases would be beneficial and fully support genetic screening prior to pregnancy for those who want it. “The nice thing about genetic screening,” Gail said, “is that you have all the information and you can make educated choices.”

Next Article: What It Means to Be a Carrier of a Genetic Disorder >
< Previous Article: Knowledge is Power When You’re a Carrier