What is Fragile X Syndrome?

Fragile X syndrome is a condition that causes a spectrum of developmental and behavioral problems, which tend to be more severe in males. It is the most common form of inherited intellectual disability. As infants, children with fragile X syndrome may display poor muscle tone, gastric reflux, and frequent ear infections. Their motor and mental milestones, as well as their speech, tend to be delayed.

Children with fragile X syndrome often have behavioral problems such as anxiety, hyperactivity, handflapping, biting, and temper tantrums. Roughly 15% of males and 5% of females with fragile X will experience seizures. While some experience heart murmurs from a condition called mitral valve prolapse, it is usually harmless and may not require treatment.

In females, who often have milder symptoms, behavioral problems may appear as depression, shyness, and avoidance of social situations. Some people with the condition have attention deficit disorder, with an inability to sustain focused attention on a specific task. About a third of women with fragile X syndrome have no cognitive impairment, while the remainder have some degree of cognitive, behavioral, or social difficulties. Some females with fragile X syndrome have mild intellectual disability.

Fragile X is inherited differently than the other diseases on JScreen’s panel. 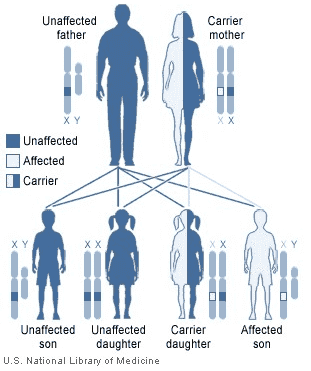 Fragile X syndrome is among a group of diseases called “trinucleotide repeat disorders.” These conditions are caused by a sequence of DNA that is repeated over and over in the same gene. While everyone has these repeats, it is the number of repeats which determines whether or not a person has the disease or can pass it on to future generations.

Fragile X syndrome is caused by a mutation in the FMR1 gene. This gene contains a segment of DNA called the “CGG repeat,” in which a particular section of DNA is repeated a certain number of times in a row. By counting the number of CGG repeats that each parent has, we can determine the likelihood that his or her child will have fragile X syndrome.

How Common is Fragile X Syndrome?

How is Fragile X Syndrome Treated?

There is no cure for Fragile X Syndrome; however, children with the condition can be treated and supported in many ways. They may benefit from educational support like early developmental intervention, special education classes in school, speech therapy, occupational therapy, and behavioral therapies. A physician may also prescribe medication for their behavioral issues such as aggression, anxiety, or hyperactivity. A small number of these children experience seizures which can be controlled with medication. While some experience heart murmurs from a condition called mitral valve prolapse, it is usually harmless and may not require treatment.

What is the Prognosis for Someone with Fragile X Syndrome?

While many individuals with fragile X syndrome have learning and behavioral problems, they generally do not have major medical problems and can live a normal life span.

Testing for fragile X syndrome could reveal information that affects YOUR future health.  Men and women with a premutation do not have fragile X syndrome, but may experience certain physical symptoms. While they are intellectually normal, they are thought to be more vulnerable to anxiety and depression. The key risks for carriers of a premutation are fragile X-associated tremor/ataxia syndrome (FXTAS) and premature ovarian failure (POF).

FXTAS: About 40% of men over the age of 50 with a fragile X premutation will develop FXTAS. (The percentage of women premutation carriers affected by FXTAS is unknown, but is thought to be lower.)

FXTAS causes an inability to coordinate muscle movements (ataxia) that worsens over time, tremors, memory loss, dementia, a loss of feeling and weakness in the lower legs, and some mental and behavioral changes. Often symptoms of FXTAS begin around age 60 with a tremor, followed several years later by ataxia.

For more information about Fragile X Syndrome you can visit these sites:
www.fraxa.org
www.FragileX.org
www.ncbi.nlm.nih.gov/books/NBK1384/
ghr.nlm.nih.gov/condition/fragile-x-syndrome